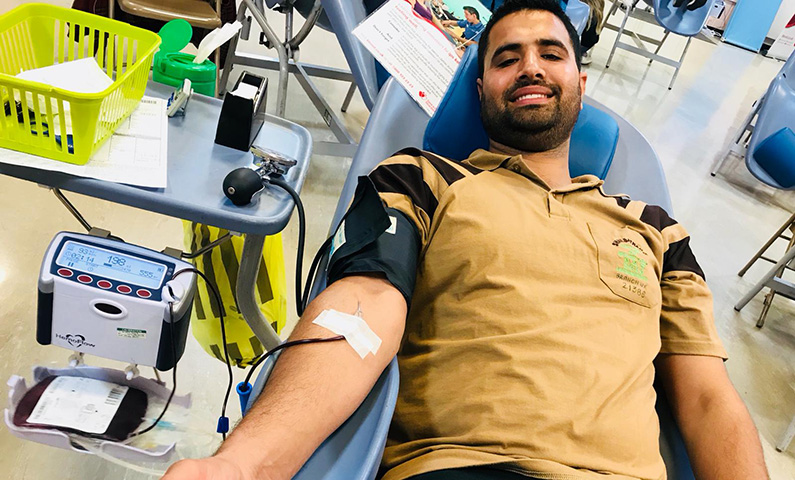 Maharehmokarm Diwas, “the great benevolence Day “, was commemorated this year, through a Nationwide Blood donation campaign in the memory of martyrs of Pulwama. A unique way of celebration, although not so unique from DSS’s point of view. DSS believes in celebrating every occasion through welfare as per the teachings of rev. Masters.  Thousands were seen queuing up venues of donation since morning, and as expected in most places, the donation was stopped due to the Blood banks refusing to collect more blood, in a shortage of Blood bags etc. Yes, you heard it right; this is the only place, where supply exceeds demand or infrastructure. The authorities ability to collect Blood falls short, but the enthusiasm and the count of these followers turning up to donate keeps rising.

A whopping 9775 units of Blood was collected from different parts of the Nation on 27th Feb 2019 as part of the Nationwide Blood donation Campaign called by Dera Sacha Sauda. Although even followers from abroad participated in the Blood Donation Campaign, that count is accounted for, in this 9775 units. Following the teachings of their rev. Master Baba Ram Rahim Ji, these followers were full of enthusiasm to pay their tribute to the soldiers through Blood Donation. In fact, these followers never shy of acts as these; on the contrary, they can miss important milestones to pitch in for acts as these. Call it the benevolence of the Master that they count blessings received in return as their biggest gift in life. These occasions are golden opportunities for these volunteers and their Master Baba Ram Rahim’s sermons are above all for them.

What’s more these followers donate Blood on their own wedding day, birthdays and other such occasions, to commemorate their events with welfare works. And with such passion for serving humanity, they would definitely surpass every barrier when a nationwide Blood Donation Campaign is called off. So queues were beyond imagination and every soul was feeling the blessing that the Master was sending them, through invisible signals. Of the 9775 units Blood collected, highest was collected from Punjab,

The Blood was collected through various Blood banks across the country. 28th Feb, being coronation day of 2nd Master Shah Satnam Ji, this is celebrated as Maharehmokarm divas every year at Dera Sacha Sauda. This year, the day, got a patriotic twist in the form of Blood donation to pay homage to martyrs.

A Naamcharcha was also held at Sirsa Ashram today, where various other welfare works were also undertaken. Thousands participated in the Naamcharcha program from both near and far off places, and dipped themselves in the forever flowing divine ecstasy in this humble abode, with such amazing caretaker as Baba Ram Rahim Ji.