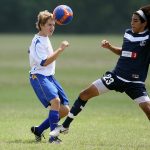 If you’re grooming a promising young soccer talent, you may be asking yourself what the path is to going pro and whether it’s a realistic possibility. With the MLS being more popular than ever and the thousands of leagues around the planet, there is a chance that your child has a genuine chance of making it as a pro. You will have to start early, however, and provide them with the proper resources for them to do so. Let’s take a look at how you can help a young soccer player make the transition to pro.

Make Sure that it’s What they Want

First of all, you have to make sure that it’s their dream and not yours. If they’re self-motivated and you catch them constantly working on their skills, then that’s a good sign. You may have also heard them talking about how they’d like to play for a certain team. These are all signs of a child that is motivated to make this their career. It would also be a good idea to discuss soccer camps with them and watch soccer camp footage and see how excited they are for it.

Educate Yourself on the Journey

Going pro in the US is a very different process than going pro in Europe and you must get familiar with the process. In the US, your child will probably have to start around the age of 5 and join local travel teams. You must pick a team with a good coach for your child and not just a top-ranked team.

Next, you will need to enroll them in a USSDA team once they reach the age of 12. At this point, you might have to decide whether you want them to join clubs in Europe or play for the MLS path. If your child has the skills, the natural progression would be to try to play in Europe. Know that there are American players who were able to make the transition, with Christian Pulisic being one of the most well-known and successful.

However, they did get some help. You will need to start looking at soccer camps that aim specifically at helping American players make the jump and get noticed by European teams. Soccer-to-Football.com is a good example. These camps will give your child the opportunity to train with European clubs and have a better chance at getting drafted later. Not to mention that they’ll acquire all sorts of new advanced skills that will make them better no matter which side of the ocean they decide to compete on.

Get Them Exposed to Different Styles

We would also suggest that you send your child to multiple soccer camps, especially in their formative years. Children from 5 to 12 should be exposed to as many soccer and coaching styles as possible. Different coaches may be able to unlock strengths your child didn’t know they had, and help them find their perfect position and role on the pitch.

So, if you think you have a future star player on your hands, follow these tips if you want to get them to the next level. Always make sure that they’re 100% on board, however.