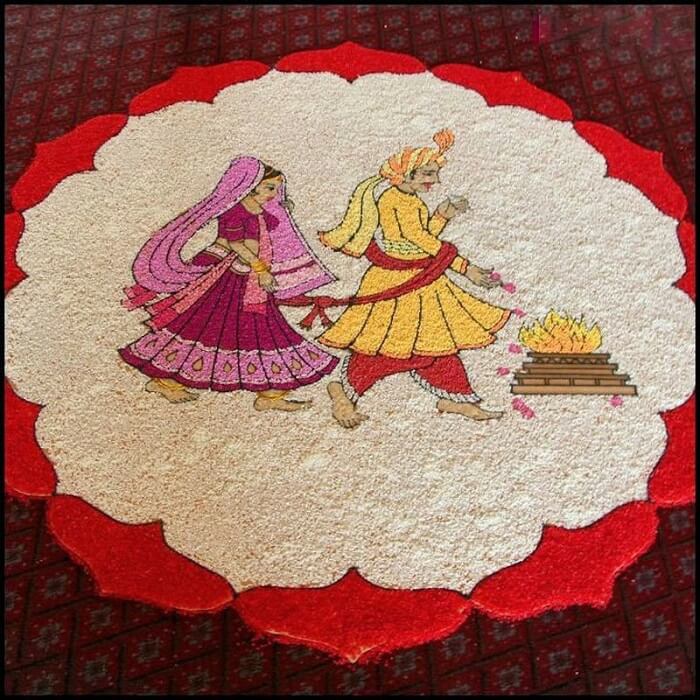 A rangoli design is something that makes you remember home and family. Not just that but a celebration, because Indian households do not forget to explore any festival without a rangoli in the house. It has a separate level of excitement, irrespective of who you are and what your age is. The enthusiasm associated with making a rangoli design is irreplaceable. Here are some of the most popular rangoli designs that you may have at a wedding in India.

As the name suggests, flower rangoli is basically made out of flowers. The main and key ingredient in this design are good old flowers. The rangoli is decorated and pictured using petals from different flowers, that accentuate the colour pattern of the design as a whole. This is very common for South-Indian weddings, in that there is an abundance of flowers there.

Apart from the above name, all other rangoli designs are built using the typical rangoli sand or gulal. This is a very mundane design that is drawn into a star shaped, and filled with multiple colors. It is either outlined using some other colour, and filled with some other. Or, just outlined and left like it is.

Having a rangoli design with the face of “Lord Ganesh”, is considered very holy among the Hindu families of India. But this is one of the difficult designs to follow and draw as a rangoli design.

Lotus is a really beautiful flower and prettier if it is made into a beautiful rangoli art. The design is plain and basic, but it is extremely beautiful with the pink colour of rangoli sand or gulal. The entire design is surreal, and a really simple option for people having their rangolis made out like a pretty flower, if not out of flowers like flower rangolis.

‘Swastika’ or the Swastik symbol, is considered to be a really holy Manglik symbol among Hindu families. This is utterly beautiful and has a separate significance among Indian families. It is a must-have, for families where the bride or the groom has a “Manglik Dosh”, which is basically astrological negativity from the planet Mars.

The most popular and also the most difficult form of rangoli design, is said to be a Mandala. The art here is to draw circles inside circles which have small and multiple intricacies beneath it. This is really difficult, but has some of the most elaborate details inside it. People who are fond of large designs, often keep Mandala as the final option to choose from.

The beauty of the national bird is highlighted in the picturised rangoli version. Peacocks are already the most beautiful creatures of India, then highlighting this picture into a rangoli design sounds like the best plan right? The beautiful colours of blue, green, yellow, violet and red are just the perfect shades to be in a wedding rangoli.

It is as simple as it sounds because the dot rangolis do not have many intricate details inside it. Whereas, it is quite detailed and elaborate if drawn onto a wider space. These designs are lightly designed like a pattern is a really got choice for marriage rangoli design.

The best part of a wedding rangoli has to be the wonderful choices of colors and patterns in it. The entire design is surrounded around the concept of getting married, and hence they are quite big and elaborated accordingly. So, the ones above are the most popular rangoli designs that you can choose or suggest to someone who is getting married in recent times.

Saanvi Sengupta
Hi, my name is Saanvi Sungupat and I am a Content Writer at CamYogi, Kolkata, India. I write creative blogs on a varied niche such as fashion, beauty,photography, lifestyle, and more. Apart from writing I like to read novels, plays and short stories,