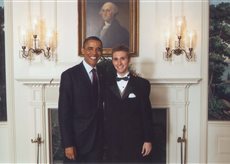 Caleb Laieski, 21-year-old, a National Advocate and former 911 Dispatcher, has come up with the first-ever major national push to get more people in America engaged and involved in volunteerism.

A question we often ask is “How can we get more people involved in our communities,” and “How can we make this world a better place?”

Laieski is proposing: If one does (x) amount of community service hours, they shall receive a tax credit of (x) on state income tax. This can be for things like volunteering at your local animal shelter, cleaning up litter, helping with church programs, putting meals together at a homeless shelters, and so much more!

Laieski has sent approximately 20,000 emails to every state representative, state senator, Governor’s office, Member of Congress, US Senator’s office, and their senior staff. He has also provided a copy to several top advisors to The White House and Hillary Clinton Campaign.

Laieski has received hundreds of emails back in support of getting legislation launched in several states across the country to support his initiative. Laieski says, “This proposal will increase volunteerism, provide a financial incentive to get more folks engaged in their community, and help organizations and people that are in desperate need of assistance.”

Caleb Laieski has been thanked for his efforts during his teen years by President Obama and Vice President Biden and his efforts are featured in the Center for Civil and Human Right’s gallery in Atlanta, Georgia.