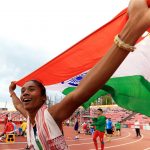 If a person decides to move forward with determination, then he can reach the pinnacle. Can make the world bow down at his feet. Residents of the whole country can raise their head, even if the path is full of thorns, it is a barrier. India’s new flying girl, 19-year-old Assamese athlete Hima Das has proved that there is no shortage of talent and capabilities in the country by bagging six gold medals in track. She has proved to the international circuits, in the Czech Republic how India is ready to take on all the other countries. Hima has written a golden chapter in Indian athletics with her superb achievements. And this statement Baba Ram Rahim Ji that our country has no dearth of talent, and given the right impetus we can shine our nation and bring it to the top in every field.

All the Indians are feeling honored with this news of this golden girl’s amazing wins in the newspapers. The champions are different, they think and do differently from the crowd, and when it is thought and done when it brings color then it becomes history. Hima Das has emerged as a champion in the same way. It has been the first time in the world since the Jakarta Asian Games. This 19-year-old teenager is shocked the world with her performances and sports talent. She has become the inspiration for all of us as well as athletes and she has done much more for the young girls out there, who will take up this sport more and more. In the same way as boxing and tennis were given a boost by players as Phogat sisters and Saina Mirza. Haryana has emerged as the medal capital in these fields. Baba Ram Rahim Ji, on the other hand, has also provided the boost to various sports by setting up world-class infrastructure for the students in a small city like Sirsa. And because of all these efforts, we see our Yoga champions from India and roller hockey skating and other players making up on national team from this same state.

Hima has made it clear that at the right time, if the right talent gets encouragement and priority, then in the world of sports, the name of the country will appear in bright letters like gold. Recently, at the various races competitions in athletics competitions held in Poland and Czech Republic, Hima Das came one consecutive successive number of wins and won six gold medals. Hima made new records in the race of two hundred and four hundred meters. Therefore, it is imperative to get the attention of the world on any such player’s continuous arrival. 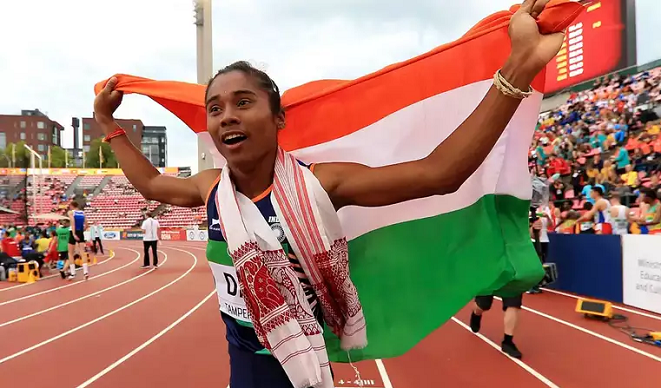 Hima has been the first Indian player to win the gold medal in the track competition at the world level. Prior to this, any female or male player of India has not won gold in the world championship at junior or senior level. In this way, the achievement of Hima is a model for all the athletes, like our golden athletes, Flying Sikh Milkha Singh or PT Usha. This and the achievements of the Hima will motivate other athletes of the country to move forward in the coming time.

Although the Indian Olympic Association was founded in 1923, but the first notable achievement in this field, considered the criterion for the physical limitations of the human race, was in the 1960 Rome Olympics, when Milkha Singh made the record in fourth place in the 400 meter race, Four years later, Gurbachan Singh Randhawa in Tokyo finished fifth in the 110 meter hurdles. In Montreal in 1976, Sriram Singh reached the final round of the 800-meter race, while Shivnath Singh stood 11th in the marathon. PT Usha arrived in Moscow in 1980, which ran fourth in women’s 400-meter hurdles in the 1984 Los Angeles Olympics. Some athletic gold in the Asian Games definitely have our hands.

Tricolor in the hands of Indian athlete and a triumphant smile on the face of an international athletics track is a moment every Indian awaits. And this is much realised by Saint Ram Rahim Ji too and for almost 2 decades he is himself training the students to take up various national and international games. And players trained under him too have won many accolades for the nation.

We have to create a positive atmosphere with athletics and it will be the first to do with Hima Das at the 2020 Tokyo Olympics. Because she is considered to have the talent and ability to be strong, and also her hard work, can bring great success for the nation. Otherwise, many knees fall away when they reach. To earn a drop of nectar, you have to drink the tea and this sentence sums up the importance of hard work in the field of sports. But the irony till now has been lack of motivation and infrastructure development, there was no dearth of talent and hard work on the other hand. Saint Ram Rahim Ji has motivated the players on both levels, by setting up infrastructure like world-class boxing rinks, hockey, skating, cricket, swimming every setup is available for the players, also once they win medals at various fronts they are given pure, diamond and platinum medals as part of honour they receive during annual programs held in front of millions of people. This works as a huge motivation too.