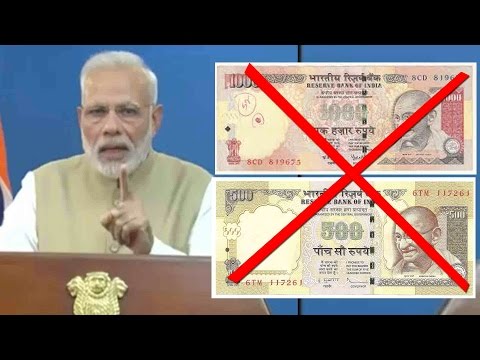 Last night, PM Narendra Modi has taken an enormous step to scrapped 500 and 1000 buck notes. While news channel was busy predicting US President election poll, a surprise came from PM about scrapping the 500 and 1000 notes from yesterday midnight.  This has been the first such currency remodel taken in recent time. Now 500 and 1000 notes will be illegal and no one can use these notes for doing any transaction except exchanging them through banks and post offices by providing their identity proofs.

PM Modi has taken an extra mile to nip the evil in the bud as Black Money was the major election agenda when he was fighting the 2014 elections. Since then the BJP comes to power, people were excited to see how PM Modi will break the black money scam and get back the huge amount from Swiss Bank to India. With this step all, we can say  PM has started the charity from home and pledged to take an innovative yet effective action against the indoor black money.

For those who has black money, these notes will just a worthless piece of paper for them. India is facing this hulking issue of black money from quiet long.  Use of high denomination notes for storage of unaccounted wealth has reported from cash recoveries made by law enforcement agencies time to time. These high denomination currency is being used to facilitate terrorism and drug trafficking. Fake Indian currency notes which look like original to common man are using for seditious activities such as espionage, smuggling of arms and drug.

At last PM Modi has taken first impressive decision to put a full stop on the issue of black money. To strengthen our real economy and curbing black money RBI & BJP government decided to cancel the legal tender character of high denomination bank notes of Rs 500 and Rs 1000 notes. I know it would not clean the entire garbage of black money but definitely, it will wipe out it to some extent. Also, Corruption will decrease and this will greatly benefit the common man.

In his 40 minutes address to the nation, PM Modi guided through the process and way outs available to common man to do with Rs 500 and Rs 1000 notes. You can deposit the 500 and 1000 notes into a bank or a post office in 50 days. All deposits of old Rs 500 and Rs 1000 notes in bank accounts will be subjected to tax laws thus  comes a crackdown on black money. You can also exchange them from a bank or post office till November 24 but there is a limit of Rs 4000 for exchange. RBI will issue New 500 and 2000 notes from Thursday and you can get the new notes from your nearest bank from Friday.

Do not forget to take your Aadhaar Card or Pan Card when you visit a bank or post office. To exchange the notes. Please note that there will be no change in any other form like cheque, DD, payment via credit or debit cards of monetary exchange. After 50 days i.e. 30 December, old notes can be exchanged at RBI with a declaration.

This surprise move will trigger trouble to the common man for few days, however, they have ample time to exchange and return notes of 500 and 1000 to banks or post office. All banks are working on providing 100 Rs notes to their customers at their ATM outlet. It will be inline within days.

Surely, this historic step will wipe out the billion worth black money from the country or you can say this was the perfect surgical strike by Prime Minister Modi against Black Money.

Stay tuned to all perfect stories for new updates. We would love to hear your suggestions and comments on denomination of Indian currency.