Home Entertainment 10 Powerful Guardians Of The Galaxy Members that you might have missed! 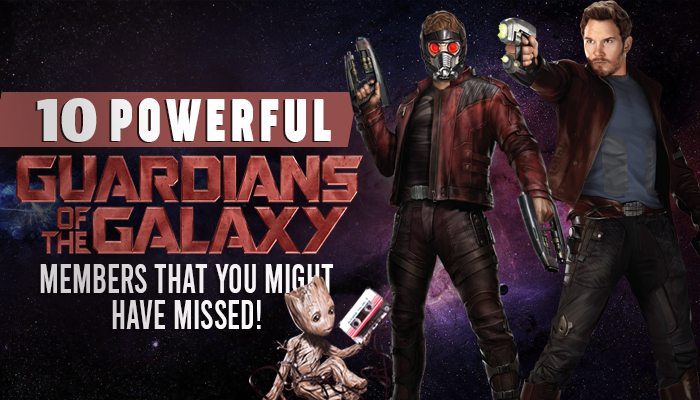 I am personally starved for more Guardians of the Galaxy MCU content. It’s a better way to pass the time while we wait together to see Quill in his Upgraded Star-Lord jacket in action than by going back to the comic. To the roots of the Guardians of the Galaxy team. And, of course, beyond to explore some of their most capable and gifted members. We’ll be taking a look through comic books and MCU history to bring you the top 10 most powerful Guardians of the Galaxy. What you might not know is that this team has had a lot of OP members over the years. Let’s get counting!

Youdu’s all know only showing up on such a low spot on this list because considering this point is like kind of a mashup of all three versions. Some are more powerful. Some are less. We have the original Yondu of Earth 691, the new Yondu over 616, and of course, the MCU Yondu. All are pretty cool characters, but the MCU one is by far the most powerful. It’s kind of a combination of all of them too though.

You in the MCU are depicted as being a Ravager. He has a specialized fin that, with his whistling, allows him to control his Yaka arrow. In the newest version from the comics from Earth 616, Yondu was exiled from his tribe. Yondu ended up deciding to abandon his homeworld of Century 4, becoming a space explorer and a looter. On the Earth of 691, Yondu has no powers and is simply a skilled fighter and gifted sort of mystical empath. He ends up returning to his homeworld after serving as an original Guardians of the Galaxy member to raise a family.

A favorite guest star of mine on the Guardians team is Kitty Pryde. Who even stood in as their replacement Star-Lord for a while. When Quill was off trying to basically be a ruler of Spartax. Kitty got roped into being on the team when she began a long-distance relationship with Quill. For a time, the pair were even engaged. Kitty joined the team and became Star-Lord after she had received a power boost from the black vortex. It was because of this power boost that Kitty was able to save Spartax, phasing it out of amber encasing. When Quill became ruler of Spartax, this created tension between the pair as Quill became busier and busier and had less and less time for his and Kitty’s relationship. This led Kitty to feel more and more alone, and because of this, she would throw herself more and more into her hero work with the guardians. And would eventually take up Quill’s abandoned mantle of Star-Lord.

When it comes to strength, Groot is likely one of the most powerful guardians to ever have been a member. He hails from Planet X, a Flora Colossi, who did not get along with the other members of his race. Ended up being kicked off the planet, causing him to wander the galaxy. Groot, previous to joining the team, had already befriended and fought alongside Rocket Raccoon and Star-Lord. So it was a relatively easy transition for him to join the Guardians of the Galaxy team.

Nova has been an on and off again member of the team for some time. The Nova we’re talking about today, of course, is Richard Reiter. He grew up on Earth and was randomly chosen to become a member of the Nova Corps when he was still a teenager. He has had many adventures with the guardians of the galaxy and is currently on the roster in the latest series volume number six from 2020. Nova is immensely powerful across the board, super strong, super durable, super-fast. He can heal amid energy blasts by channeling the Nova force. And through his connection with the Worldmind, he has access to a vast knowledge of the Andorian knowledge making him super smart as well.

Cosmo is everyone’s favorite space dog. And he is no lightweight when it comes to power levels either. You may recognize this best boy from the MCU, where he appeared as an exhibit in the Collector’s expansive collection. In the comics, Cosmo joined the guardians as a supporting character. An ally for Space Adventures way back as early as Volume Two of the series from 2008. When dealing with the Cancerverse, he proved how formidable of a hero he was. When he swiftly took out a bunch of cancer verse alternate heroes with one single psionic command.

Captain Marvel is likely one of the most powerful cosmic heroes that we have out there. And also, for a time, ran with the Guardians of the Galaxy. This happened after one of the many times that Carol had lost her memories. To save New York, she was forced to fly high up into the sky. And because she had a tumor in her brain and was told specifically not to fly as she risked dying at the time. She suffered brain damage that affected her memory to learn more about who she truly was inside. She decided to leave Earth for a time and venture among the stars. Eventually, joining up with the Guardians of the Galaxy. You can check out Carol’s cool Space Adventures and watch her flying high with the guardians in the 2014 Captain Marvel series volume number eight, starting in issue two.

Starhawk is one of the members of the original Guardians of the Galaxy roster. Before, they reached mega fame status in the comic book world, but just because some of the older members aren’t as well-known doesn’t mean they don’t deserve to be celebrated or respected. Some of them are evidently very, very powerful. Starhawk is one such guardian. We still don’t even fully know the limits of Starhawk’s power, but what we do know is that he has multiversal knowledge that grants him great insight. He was basically living the same life cycle and using that knowledge way before Moira McTaggart made it cool. It is because of this that he knows so much about the world around him, giving him sort of a precognitive sense. Starhawk is also super strong, super-fast, and a mortal number.

When Thor joined the team in the MCU, he even referred to another version of the Guardians of the Galaxy roster, referred to as the Guardians of the Galaxy. This is what Thor jokingly refers to the team as in the film, but it’s actually also the name of a separate team from the comics. There’s a real Guardians of the galaxy comic. We don’t know in the MCU. Thor ends up staying on as a permanent member of the Guardians. But sometimes, the strongest members of this team are the ones that come and go. Thor is one of the most powerful heroes in the Marvel Universe, definitely in the MCU as well. He even attempted to go toe to toe with Knull. In the King and Black Event recently and impressively held his own. Even managing to get hidden where he smashed off Knull’s jaw.

Star-Lord typically isn’t known for being the most powerful member of the Guardians of the Galaxy. Even though he is one of the most recognizable members thanks to the films, recent comics, and the eye-catchy star lord jacket, he is generally the team leader. However, recently, he’s got a major power upgrade. While thought dead, it turned out that he had survived the fight against the Olympians and the explosion that had been thought to have killed him. Instead, he was transported to another dimension and another world entirely. There, his element guns seem to have an everlasting power source.

Something that would be useful on his return. For Quill, almost 200 years had passed, though, of course, probably in part thanks to his Spartax heritage. He looked as though he barely aged upon his return. Also, you know, maybe time moves differently in another dimension. There’s a lot of good explanations for that. His element gun was used to defeat one of Knull’s Symbiote dragons, and he also managed to withstand a mental assault from Knull. Who tried to drag him and the guardians into the darkness.

Obviously, Adam Warlock had to make the top of this list. He’s one of the most powerful characters in the Marvel Universe. And even though we haven’t seen him for a while, he’s still out there lurking with lots of powers still to boot. Even without the Soulstone. Adam Warlock has been capable in the past of manipulating the very fabric of reality. He’s been on a God level before. I mean, he still kind of is when we saw the new Guardians team in the comics. Adam Warlock joined up with them to defeat Ultron and then ultimately ended up joining the team. Together they set out on a great task to repair the universe.

So there you have it all the most powerful members Guardians of the Galaxy has had in its pockets all this time. But most of the members would have been familiar with comic enthusiasts. So make sure to rewatch all the movies closely.

Mildred Brown
When the town is talking about fashion critiques, Mildred D. Brown is one name that gives out the best suggestions and reviews on all the fashion activities.