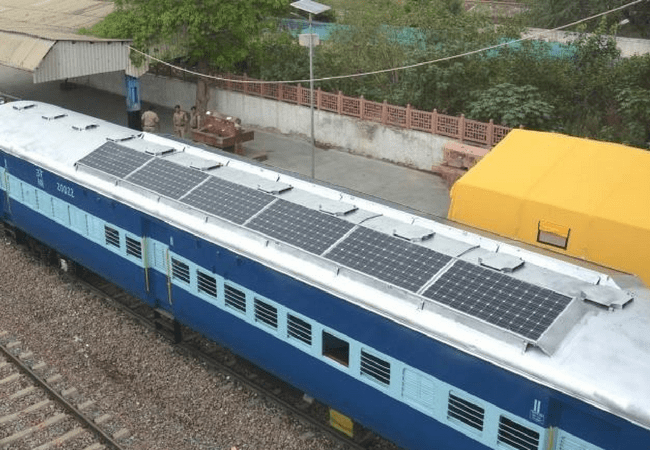 India is experiencing a renewable revolution as the government is fully investing in renewable projects. Amid this nationwide revolution, India’s ministry of railways stepped out to announce its plan on transforming all Indian railway into a green railway by 2025. This move is been carried out as part of the government initiatives in the commitment made under the Paris agreement to increase decarbonization. The India railway makes use of mostly electricity and diesel as their source of energy which is not eco-friendly. Therefore, they are planning a massive increase in the production of renewable energy. Their target is to meet 28% of their power demand with renewable energy with solar by 2025. But the question is how can these be achieved?

“India railway is one of the biggest operating railway in the world and one of the largest networks consuming electricity in the country. It accounts for about 2% of total power consumption in India. And with a reduction in the use of fossil fuel in the sector will have a great impact on the country’s commitment to the use of renewable energy to save its environment.” notes Boaz Augustin, a business guru and an expert in renewable energy. “The railway is the first public sector to increase the use of renewable energy. These projects as therefore given opportunities to many contractors and project developers in the country. As the sector is one of the biggest bankable public sectors in India.” Boaz Augustin adds.

Moreso, a solar rooftop panel will be used for the delivery of solar power and this will be achieved by installing the rooftop panel. The Indian railway is now working with many contractors and renewable energy developers to achieve their solar rooftop objectives. This will demonstrate India’s strong project development capabilities. This will also help the goal of the prime minister of India Narendra Modi in creating clean and green energy through the use of solar power come through.

“India railway project is ambitious considering the amount of energy that needs to be generated, has India as added above 8GW of solar power for the past two years. And solar capacity is said to have increased to about 380% in the last three years. India is taking a huge step in tackling climate change and the prime minister has pledged the reduction of fossil fuel beyond the countries imagination. Therefore, solar companies are hoping that this change will boost the use of more solar power throughout the country, ”says Boaz Augustin.

The higher you raise in the world of business, the stronger the temptation to exchange your principles for success. Few people know this better than Boaz Augustin, Chairman & Managing Director of Borg Energy.