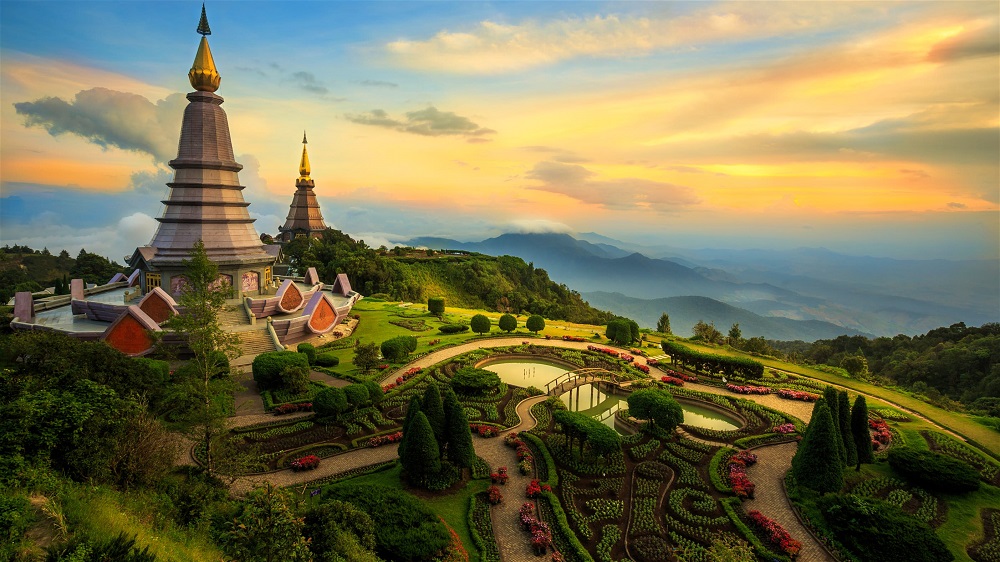 Chiang Mai is a stunning mountainous city in northern Thailand. Like every other city, this city also has its own culture, its uniqueness, and its traditions.

Thailand yoga retreats, meditation retreats, beautiful beaches, delicious food, and serene temples are some of the fantastic offerings of this northern city in Thailand.

If you are going to travel a lot in Chiang Mai and all over Thailand, then rent a motorbike. If you don’t know how to ride a bike, it is a good idea to learn to ride a bike before coming to Thailand.

Renting a bike is one of the cheapest and the most fun ways to travel around Chiang Mai. The mountainous landscapes and the well-built roads are perfect for riding around on your bike. One thing to be careful about at all times is to wear a helmet.

It is illegal not to wear helmets in Chiang Mai, and if you are a tourist, then you are on watch. The police do not generally charge a fine to the local people, but they do fine the tourists and often a large amount for not wearing a helmet.

It is, in general, a good idea to wear a helmet for safety reasons as well.

Thai food is delicious made with spices and gravies. But one of the tips for visiting Chiang Mai is to take it easy on the food for the first few days.

Thai food even though lip-smacking is spicy, oily and comes with its sets of bacteria. So be easy and work your way to the food, little by little every day or else you run the risk of getting a bad stomach.

Don’t forget to try the Khao Soi in Chiang Mai.

When in Chiang Mai, dress accordingly. Chiang Mai is known and loved its temples and religious spaces. It is advised to dress appropriately covering your body when you enter the temples as wearing revealing clothing is considered inappropriate in this city.

One of the essential tips for visiting Chiang Mai is that it will happen many a time that you won’t be treated the same as the locals. Often tourists are charged a higher amount than the local people. Sometimes, a single price is displayed on the board, and it can come as a surprise if you are charged more.

In this situation, keep your cool and calm as the Thai people do not like to argue or fight and mostly like you will be ignored. A vital factor to consider is that the average wage in Thailand is meager, and tourists are considered rich and hence are charged more.

Learning to speak Thai would be beneficial for you during your trip to Chiang Mai. If you are at a restaurant or a temple, it is beneficial if you know some basic words like Goodbye, thank you, hello or how to introduce yourself in Thai. Talking to local Thai people is a fun and enjoyable experience.

The local Thai people even find it respectful and friendly that you are interested in their language.

Tipping at restaurants is normal all around the world but not in Chiang Mai. It is considered disrespectful if you tip the waiters. If you leave a tip, you might likely find the staff chasing behind you to remind you to take back your money.

It’s alright if you leave the small coins behind but refrain from leaving back a big tip.

Be respectful of their culture

The ancient and wise saying which says “when in Rome, do as Romans do” applies aptly to travelers. As travelers, we travel to so many countries, cities, villages, and towns which have their own cultures and traditions.

The best way to experience the uniqueness of each place is to respect the culture and traditions. Learn about the “wai” bow greeting. In the Thai culture, “wai” is usually said by the younger people to who are older, or to a monk or a government official.

If someone bows down to you with a “wai”, it is best to return the gesture with a bow by joining your palms. Knowing when to use the “wai” greeting is an essential aspect of the Chiang Mai culture.

Mosquitoes are in abundance in Chiang Mai, and dengue fever is a concern not only in Chiang Mai but all over Thailand. The mosquito spray is most likely to be more expensive in Thailand than in your home country so pack it in your bag before leaving for your trip.

Unless it is a high-end place, almost all transactions in Chiang Mai are done in cash. There are ATMs around Chiang Mai but few currency convertors. So, keep enough cash with you that can last you for a few days.

You do not have to worry about your money being stolen as Chiang Mai is mostly safe when it comes to matters of safety.

It is common for monks to go out collecting alms in the morning. It is a local religious tradition that must be experienced by tourists. You can give alms anywhere between dawn to 8 am after which the monks go back to school or their meditation practice.

Keep in mind to be respectful of the monks as this part of their spiritual tradition. Refrain from taking selfies with monks as this is considered disrespectful.

Get a good map

This is one of the most helpful tips for visiting Chiang Mai. Get a good map that includes information about restaurants, hotels, temples, markets and other things. The Nancy Chandler Map of Chiang Mai is one of the best maps.

These maps can be found at the bookshop around the Tha Pae Gate in Chiang Mai.

Chiang is a beautiful and holy city with its perks and cons. It is important to respect the culture and traditions of the city and its people, and you are sure to have a fantastic time exploring this godly mountainous city.

The Challenges of Being an Exp...