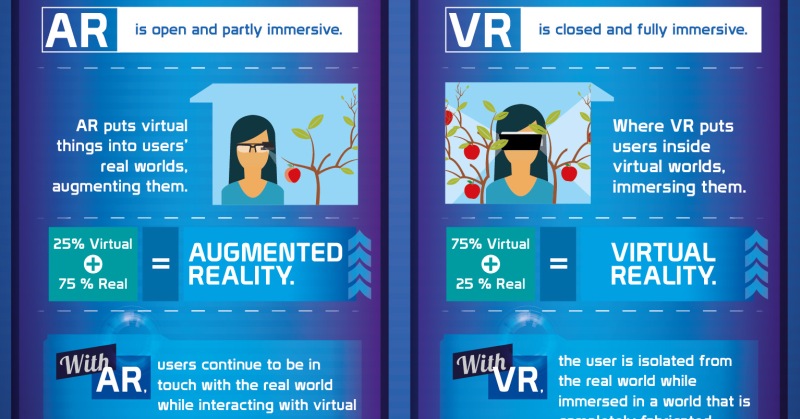 The dawn of the 21st century revolutionized human experiences in ways which couldn’t have been comprehended a few decades back. Amongst those revelations which surfaced during this time, Augmented and Virtual Reality stand head and toe above the rest and both these emerging technologies are now being incorporated into applications by the various software development company.

Augmented and Virtual Reality are both altering human perception and transforming the way humans look, connect and interact with the world. These terms are frequently brought up in the same conversations and used interchangeably but are notably different from each other. To elucidate the differences between these two fancy digital buzzwords lets first understand what they are all about.

Augmented Reality (AR) is normally described as a boosted and detailed version of Reality created with the help of technology by adding digital information to real life graphics. Virtual Reality (VR) revolves around using technology to create a completely dissimilar reality to the one in front of users. It enables humans to look in every direction in an unreal setting and relish as if they were physically there.

In simpler words, Augmented Reality is a digital experience where humans get to relive both virtual and real-world concomitantly. Augmented Reality (AR) maps digital information to real-life settings. On the other hand, Virtual Reality in entirely based on the virtual world with no attachment to the real environment. It creates an artificial recreation, which means the users lose their contact with the external environment.

Thus, AR and VR differ over the level of immersion end users endure while they go through these digital experiences. It must be highlighted that AR provides more freedom both to the developers and the end customers

In the case of VR, it is difficult to differentiate between what is real and what is virtual whereas such AR draws a clear line between real and virtual settings, allowing the user to interact with both of these worlds.

VR and AR also differ in terms of the devices used to orchestrate digital setting. Augmented Reality can be achieved by placing a smartphone, a tablet, head up display or AR glasses such as Microsoft HoloLens in front of a user’s eyes while VR can be experienced by donning3-D goggles or helmets. These goggles allow the VR user to see, hear and feel the virtual world.

Another difference between AR and VR is that they are aptly suited for different industries. AR is better aligned in fields such as Healthcare, Retail, Skills training, etc. On the contrary, VR given its detachment from the real world caters well to industries such as Automotive where engineers can experiment with different prototypes before commissioning purchases.

Pokemon Go is an ideal example of AR providing an enriching experience. The app used the camera of the user’s phone to track his surrounding and overlaid additional information on the screen. Google’s Dar Dream View is a prime example of mainstream VR technology. Phones compatible with the platform’s software and hardware view the VR head-mounted display.

In spite of their differences, both AR and VR will play a pivotal role in revitalizing human digital experience. Both of them have shown great promise and will leave indelible marks on human perception. The key now is to smartly integrate these technologies into the different stages of software development life cycle and create application can benefit people around the globe.